In late March, Planetshakers Awakening 2016 was held over four days at Melbourne’s Hisense Arena. The theme was Overflow with lighting designer Paul Collison taking up that theme with spectacular results.

“I wanted to create a design that was all encompassing as with these events it’s not just a band on stage and an audience watching,” explained Paul. “It’s meant to be all inclusive so I wanted my design to ensure that the audience were drawn into it.”

The result was huge fingers of truss that reached out from upstage centre of the stage over the audience, stretching out as far as 72 metres over front of house. The effect is that of an overflowing, cascading wave. 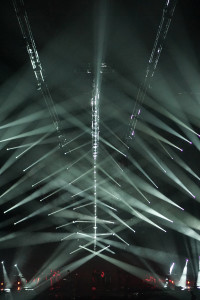 Paul admits that initially he wasn’t sure if he could actually pull off his design and it wasn’t until he sat down with lighting supplier Resolution X to discuss the mechanics that he realized it could be done.

“It was all down to some creative rigging and all using Res X’s stock gear, no fancy custom builds,” said Paul. “Part of my vibe was that I wanted the trusses to be lined with fixtures as I wasn’t going for less of a bright light but more fixtures. So I used 100  Martin MAC700 Profiles and 100  Martin  RUSH MH6 Washes, which did all of the grunt work. Compared to more recent fixtures, the MAC700’s aren’t that bright and the RUSH MH6 were not designed for use in arenas, however in those sort of numbers they did a stellar job.”

Martin MAC 101’s were liberally used as truss toners throughout the fingers with Paul commenting that they are his favourite truss toner.

“They give you the ability to obviously tone the truss in colour whilst also adding another layer of texture with movement and that’s a cool thing I have been doing for a while,” he said.

In the air were  Martin MAC 2000 Washes and  Martin MAC 700 Washes for audience light. Martin RUSH MH4s were bunched in groups of four and sprinkled throughout the rig to deliver big, parallel beam looks.

“The RUSH MH4 were very cool and quite an impressive fixture,” commented Paul. “Both the MH6’s and the MH4’s did a really good job. The MH4 as a beam light and a low budget filler light did an amazing job.” 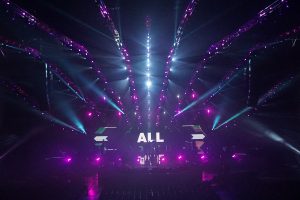 Martin MAC Vipers and  Clay Paky A.leda B-EYE K20 were situated on double hung trusses behind everything to add another layer of texture and provide some different looks.

“I needed some really powerful fixtures to punch through and they were ideal,” added Paul. “We then lined the front of the stage with some more B-EYEs, again for another layer. Also upstage behind everything were 16 x Clay Paky Stormy CC’s and I really liked the ability to do subtle colour variations, not necessarily going into saturated colours but strobing in pastel colours.”

Groups of  Clay Paky Alpha Beams were rigged above the audience to again help make the show all-encompassing whilst Alpha Profiles were used a keylights.

One hundred ShowPro DreamPix were run at similar spacing to the MAC700s and MH6’s as a video texture that ran across the fingers. They enabled video elements to be run up and down the trusses, and were pixel mapped from Pandora’s Box Media Player Pro.

In fact there were 5 x Pandoras Box Media Player Pro running video to the mainstage screen and the DreamPix with a grandMA2 light in control.

The event ran for four days, from 8am until 11pm and Paul reported that everything ran flawlessly, a testament to Res X’s gear.