Melbourne’s Windsor Hotel, one of the world’s oldest Grand hotels, has illuminated its historic façade in celebration of its 130th birthday. 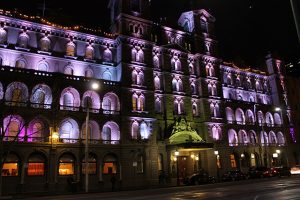 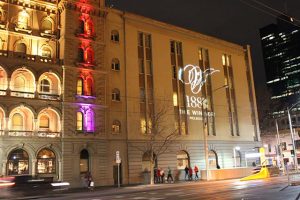 Lighting design was by Phillip Lethlean who turned to Resolution X to help realise his elaborate and colourful design. The original part of the Hotel is lit by over forty  Outdoor LED Multi Pars and thirty plus Outdoor LED Floods whilst the 1950’s extension is used as a projection surface.

“The ResX gear was all good,” commented Phil. “We were using them to cross fade colour.  We also had a few LED Honeycombs which I was keen to use because you get the plastic filters on them which help contain the beamwidth.” 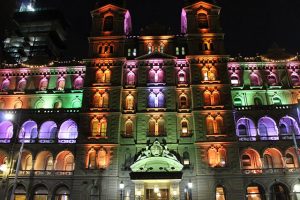 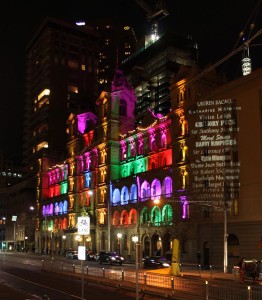 Res X constructed a purpose-built outdoor housing for the lone Clay Paky Alpha 1500 Profile on the job. The Alpha 1500 projected a designed ‘essay’ which chartered some of the history of the hotel and the characters that have stayed there.The seven-minute cycle was programmed on a MA Lighting grandMA Ultralite classic console, then loaded onto a replay box which triggered the show every night. All of the control was in one of the hotel towers and so a W-DMX Black Box G4 F1 was used to talk to the Clay Paky fixture.

Phil reports that everything worked fine despite the tricky install; they had to go in all the hotel rooms to rig the gear on the balconies and that required a lot of coordination with the hotel management.

“We had quite a bit of bad weather too but everything chugged along well,” he noted. “And of course Res X did a great job.”